A heron flew over Dale Cottage


A heron flies over Dale Cottage and the last of its pink fuchsias. On the driveway, the man in the blue Vauxhall Zafira with the ladders on the roof is listening to Sigala at high volume. He rocks back and forth enthusiastically in the driver’s seat, mouthing the words, ecstatic.


In the ‘Best Kept Village’ that smellsof two-stroke chainsaw oil, the houses are never finished. The builders have moved on a generation. Out have gone those firms, traditionally named after their proprietor, whose contractors have broad Yorkshire accents, gold earrings and eighties hits on their site radios: ‘Don’t You Want Me, Baby?’ And in have come the firms named after a single word synonym for ‘house’: Home, Abode, Dwelling, Base etc. whose contractors have tattoo sleeves, full-face beards, and nineties hits on their site radios: ‘A Design For Life’.

At the big house in the woods, one of the modern, nineties builders is hoovering the pattern imprinted concrete driveway while another spreads a smelly solvent sealer onto it with a yard brush.

At the house with the big view, the woman in the bathrobe is talking to her neighbour, the man in the lumberjack shirt who has retired to make chainsaw carvings of owls to sell at country art fairs. Her as yet unreconstructed builder, is up a ladder carrying out some never-ending repairs while listening to a histrionic heavy rock guitar solo from about 1986: ‘Livin’
on a Prayer’. “I had the pheasant and Richard had the grouse”, the woman explains, “It was really nicely cooked. Really nice. Lovely”.
Posted by Kevin Boniface at 16:57

Email ThisBlogThis!Share to TwitterShare to FacebookShare to Pinterest
Labels: A Design For Life, Chainsaw oil, Don't You Want Me Baby, Livin' On A Prayer, Vauxhall Zafira

A cyclist with squeaky brakes and a pair of crutches strapped to his back passed me as I walked into work.

A cyclist with squeaky brakes and a pair of crutches strapped to his back passes me as I walk into work.

On the bus with some other men in high visibility clothing, the main topics of conversation are caravans, caravan based holidays, and the football transfer window. I alight at the nursing home and follow the woman on the mobility scooter past the ivy-covered lampposts, the pink hydrangeas, the smeared dog shit and the sandwich packaging. I turn off along the terrace with no front gardens; a long row of telly backs and cable knots. I turn off again to a stinking dog piss accreted yard of crisp packets, expanding foam, dandelions and empty milk cartons next door to an obsessive mini Versaille of hoverflies, succulents and fancy gravels. The clock tower strikes the hour and the running man with the dog jumps over the spilt grab bag of Maltesers; neat parallel rows of chocolate beads line up in the grate of the storm drain. Out from the tidy side street of bungalows, the ladies begin to flock with their hair set, their trouser suits pressed, their shoes gold and their shopping bags for life. They each round the corner into the main road and get a wet slap in the face from the big overhanging buddleia. I carry on past the sheltered houses with their gladioli in planters, beige washing lines and handwritten No Parking signs. On, past the back-to-backs where the dock leaves grow from the thick green snail-slime striated moss on the stone steps below the leaky guttering. Past the fairy lights and decking, the cooking sauce jars, squashed slugs and blackberries. On up to the new estate with the fake bricked-up windows, the concrete lintels and architraves, the pretend leaded lights, the miniature gardens (where the box shrubs have already overstepped their boundaries) and the herringbone paving in the communal parking bays: a small Honda, a large Honda, an Astra a Citroen C1... I cut across the sodden plastic lawn (laid directly over stone flags) to the big, gated Victorian, Atkinson Grimshaw mansions whose wide-as- a-street driveways are bordered with poplar, rhododendron, holly, begonia, topiary teddy bears, ferns and golden beech leaves on neatly trimmed lawns; the first fall of autumn. The only other person around is the happy old man with the walking frame.
Posted by Kevin Boniface at 18:57 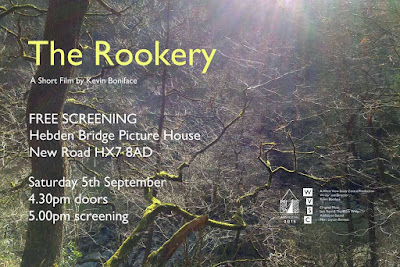 The Rookery, a short film I shot in Hebden Bridge between February and May this year, will be screened this Saturday. The film stars walkers, bikers, canal boaters, skaters, the woman in the pinny with the squirty cream under her arm, the man who is holding up a bottle of HP sauce, the man who is inside a burger bun, the woman with the purple fleece and matching hair, a box of organic pale ale, Coco and Dior, a crocodile of primary school children, Geoff, A brace of lilac waterproofs, permissive pathways, suggestive trees, a Peugeot 208, a pedigree Weimaraner, exposed purlins, a banoffee pie, the Emergency Gas Response man, an Everlast punch bag, and a psychic evening featuring psychometry…

Featuring a soundtrack by the excellent Jack Reid & the Black Whip:
www.jackreidandtheblackwhip.com