As I drove up Station Road I saw a colleague on his delivery...

As I drive up Crosland Road I see a colleague being attacked by a fat black Labrador with a fluorescent green collar. He manages to protect himself with his mail pouch before kicking the dog in the head. The dog runs off and my colleague gives me the thumbs up as I pass.
At the army surplus shop, a customer asks the proprietor whether he has a hat like Michelle wore in ‘Allo ‘Allo. The proprietor says he hasn’t.

As I make my way up the front path of a house in Greenwood Street, the door opens and a large aggressive looking German shepherd runs out of it towards me. Fortunately, the dog is attached by a length of blue rope to its owner, a man in his fifties in a torn anorak. The man
is dragged down his steps and several feet up the path towards me before he regains his footing and restrains the dog. “Don’t worry”, he says, “He doesn’t bite as a rule, It’s your bag. He doesn’t like postmen or people with bags”. The dog barks and snarls and pulls the man another foot or so up the path. “When I take him down on the field I have to have a good look around to make sure there’s no one about with a bag otherwise he’ll think it’s the postman and he’ll have them.” “Oh”, I say. “Yeah, it’s just bags— and postmen. Funny, isn’t it?”


As I round the corner into Lawton Street, a young boy of about eight or nine speeds off down the hill on a BMX. Two other boys jump up and down excitedly. One of them points after the BMX boy and shouts to me, “He’s shit his pants! His bum is wet!”

11.30am: A large woman in pyjamas comes out of the shop holding a packet of Lambert and Butler cigarettes and a copy of The Sun. She’s having a conver- sation via speaker-phone. She holds her phone in front of her face while she shouts into it in a southern accent: “... and then she says ‘Fuck you! It’s over! Now fuck off!’ You gotta love her, haven’t you? Anyway, don’t forget your key... Love you loads and loads... Byee!”
Half-an-hour later, I see the woman again. She’s smoking one of her Lambert and Butlers in the garden at number 17 with two other women in pyjamas.

I knock at the door of a house on the estate. I hear the back door open and a Border terrier runs around the corner, squats at my feet and starts pissing. I step away as the dog’s owner comes out saying, “Don’t worry love, she’ll not bother you”.
Posted by Kevin Boniface at 13:09

On my way into work I saw a bat, an owl, the short woman with the sweat shirt...

On my way into work, I see a bat, an owl, the short woman with the sweat- shirt and the peroxide perm who goes through the bins in the park and, on the pavement outside the Mortgage Introducer and International Flights shop on John William Street, a women’s block heeled boot.


At the house with the broken porch, a boy of about three or four is sitting on the window sill wearing nothing but a nappy and drinking milk from a baby bottle. I knock at the door and a thin woman in her forties with braces on her teeth flings it open and shouts “Toilet!” before adding, “Oh sorry love, I thought you were someone else”.

Mr Briggs intercepts me in his Suzuki Carry. He asks whether I’ve ever toured Scotland by coach. I say I haven’t. He tells me his wife saw an advert in The Examiner: “Up one side and down the other. Five hotels in a week!” Mr Briggs goes on at some length about his reservations about coach travel. “A sore arse... compulsory seat belts... steamed-up windows that you can’t see out of... the lack of decent toilet facilities... If you get sat next to a knobhead...” and so forth. “I said all this to her”, he explains, “but she’d already gone and booked it, hadn’t she? Her and Barbara had cooked it up together, hadn’t they? So the four of us went together: me, the missus and Gary and Barbara. And do you know what?” says Mr Briggs looking up at me from over his wire rims. “What?” I say. “We had a real time! It were fantastic! We’ve been another, one, two, three, four times since!” He tells me about some of the exploits they’ve had: “They’re only allowed to drive for a couple of hours at a time these days so we always have t’chance to have a coffee or a tea”. And how he’d got around the “seat belt problem”. “If you plug the belt into the thing before you get into your seat and then just sit on it, the driver’s alarm doesn’t go off. He’d had to tell me a couple of times over the tannoy before I figured that out.” Mr Briggs chuckles and does an impression of the bus driver, “Passenger number forty-four, could you fasten your belt please!” I tell Mr Briggs that I once travelled from London to Paris by coach and I found it quite tough going. I start to elaborate with an amusing anecdote from the journey but he cuts me short saying, “Anyway, I’m off to Leeds now” and he drives away".
Posted by Kevin Boniface at 12:59

A man is lying on his side on his asphalt driveway... 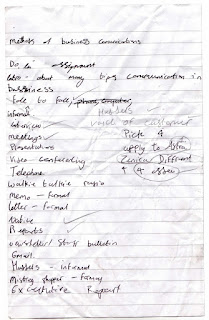 A man is lying on his side on his asphalt driveway manicuring the edge of his lawn with a pair of shears. Half his backside is showing. He rolls over onto his back to say hello.
Leylandii, berberis, box hedge and open-plan lawns. Stone built bungalows with feature arches and patio-doors, swirly carpets and telephone tables. Staffordshire ladies on the window sills. “Did you hear about the burglary two doors down? They’re on holiday. They didn’t draw their curtains, didn’t set their alarm. What did they expect?”

Two cars on the drive and nobody home.

Women walk the streets in fleeces and overactive Reactolites. Pulling on North Faces as it starts to drizzle. Swinging little bags of dog shit as they stride on towards Strawberry Drive in spotted Barbour wellingtons. Dragging a growling, clipped schnauzer as it tries to hold its ground. “Why are you like this with the postman? He’s usually so placid and lovely, aren’t you?” she says, without looking up.

In the week, it’s older, retired men with tucked-in shirts and side partings. They lie down underneath Range Rovers or fine-tune their lawns. They say “What’s she been ordering now?” about “the missus” who sometimes comes outside in her specs and unusually coloured hair. “Have you seen the postman?” she says as she sets down a tall glass and a
Hobnob. At the weekends it’s younger men who stand on their lawns in casual sportswear holding power tools. They say “All right mate?” while ‘the missus’, in her navy-blue polo shirt with the buttons undone, holds a spaniel by the collar. There are one or two children but they are at nursery except on Saturday when one of them gets strapped into the seat of his grandad’s Ford Focus and taken to the United game. His grandma waves him off, she already has her pinny on.
Posted by Kevin Boniface at 11:16

I could see a small man walking towards me in the park...

5.30am: A man is walking towards me in the park. He’s singing loudly to himself and occasionally performing a kind of shimmy. He stops to take a long drag on his cigarette, briefly looks up and notices me coming down the path. At this point, he begins to cough in what seems like a fake way and when he starts walking again, he does so with a pronounced swagger and an expressionless face.

Trizzle and N. Smith have both written their names on the May Street pouch box.

On the estate, I knock at a house to deliver a registered parcel. A man answers. He’s carrying a little boy in a duffle coat, mittens and a woollen hat, “Oh thanks, mate, that’s great, I’ve been waiting for that. Excellent!” He puts down the little boy to sign for the package and a slim women in a vest top peers around the door. Her eyes widen, “Is that your new phone? Fucking hell you jammy cunt! Mine took fucking ages. Fucking hell!”

According to the large A1 laminated poster entitled ‘The Toby Grill Hall Of Fame’, Mick has served 994 drinks and Kerry over 400 meals so far this week.


A man who looks a bit like Tony Hancock stops me in Kirkwood Drive to ask whether I know why there is so much bird muck on the roofs of the bungalows there.
Posted by Kevin Boniface at 16:04


A young man wearing a yellow vest, faded red boxer shorts and fluffy yellow slippers is sitting on my neighbour’s front step in the rain at 5.30am.


I see a fox on Station Road.

On the bus, I overhear a man telling his companion that he shat himself in bed after drinking too many Turbo Diesels in the pub.

Mrs Shaw gives me a bag of homegrown tomatoes. She says she’s completely self-sufficient as far as tomatoes are concerned.

Dr Groves opens his front door to take his mail. “It’s a reasonable day by the looks of it”, he says.

Mr Briggs pulls up to tell me he’s off to Oldham today. He pauses, then says “Actually, I tell a lie, I’m off to the office, then to Meltham and then to Oldham. I’m working on the precinct there, it’s a right bastard to park”. That’s all he says, then he gets back into his Suzuki Carry and drives away.

At the Chartered Accountants’, a chubby white male chartered accountant with brown plastic-rimmed glasses, a white shirt and a grey suit is talking to a slim white female chartered accountant in a white shirt and a slightly lighter grey suit. “Did you get through Chapeltown all right yesterday?” asks the man. “I know! I didn’t see a single white face!” says the woman biting her lip. “I bet you didn’t want to stop at the lights did you?” “No”, says the woman, “I pushed my door locks down!” She mimes twisting around and pushing down the door lock. “Absolutely terrifying”, she says.

Mrs Gaunt waves to me from her first floor window with a tenon saw in her hand.