Greenhead Park, 6.30 a.m: The glowing disembodied head of the man staring into his phone floats towards me in the dark. We pass each other and I recognise him as the early adopter hipster man who shaved off his beard and twirly moustache about five years ago.

Out in the sticks, 11 a.m: The wind rushes through trees with a dry autumn hiss, each gust followed by a shower of beech nuts onto asphalt or a clatter of acorns on car bonnets. There’s fruit from a cherry laurel too, and birch seeds, and conkers, and moulted feathers all littering the pavement.

The brand new Stanley safety boot that appeared on the doorstep of No.9 on Monday morning has today migrated up the road to No.3 via No.7 yesterday.

The man in the old anorak at the house on the moor is going to Cape Verde for a couple of weeks. He says he’s sick of this country because it’s too depressing. All the gold that he painted his mail box with in honour of the Olympic Games four years ago has worn off and it’s back to its old rusty red.

On past the dangerously weathered drystone wall and the big handwritten sign on the garage door:
GOT you
ON CAMERA
BASTARDS
ALL VALUBLES
GONE TO SAFETY
SO
piss OFF
XXXXX
SHoT GUN
BEHIND DOOR

In the yard of the old farmhouse, next to the magpie cage traps, a cat and three kittens are eating a dead rabbit.

There are wasps in the ivy at the house of the woman with the plasters on her forehead.

Back in town at the 1970s Beauty Board offices, there are black brief cases for the boys and gaily coloured desk tidies for the girls. A flat backed woman in a cardigan with tissues up her sleeve shuffles about saying ‘Thanks, love’ and the man with the rolled up sleeves writes on the spine of a box file in marker pen—he stands the file on a shelf next to half-a-dozen others and has a quick sniff of the pen nib before replacing the lid.

On the aspirational estate of barely detached new builds where nobody is ever at home, there are pansies in the borders and cans of Car Plan Tyre Silk on the doorsteps. I set off a chain of barking guard dogs. As one jumps down from a lounge window as I pass, so another at the house next door jumps up, upsetting the potted orchids in miniature galvanised buckets and the resin statues of kissing lovers whose entwined bodies make the shape of a love heart.
Posted by Kevin Boniface at 05:52 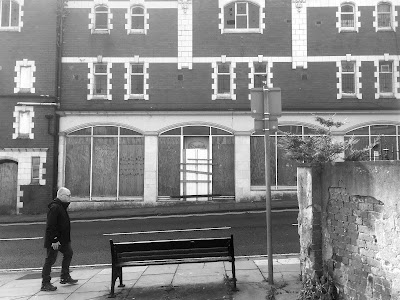 I'll be reading from Recorded Delivery and The Most Difficult Thing Ever at Morley Arts Festival, this Wednesday evening, 5th October.

Start 8:00pm
Writer, artist and Huddersfield postman Kevin Boniface reads from his Yorkshire Festival commissioned project, Recorded Delivery.
Between February and June this year Kevin Boniface took to the road to produce a series of audio and video shorts. The result is a unique snapshot of contemporary Yorkshire where One Direction perfume for under a tenner is not to be sniffed at, where the man on the bus confides he could never eat Weetabix without sugar and where there is an underlying murmur of people in tight shorts commenting on the warm weather to one another.