I found this note on the street on the way into work... 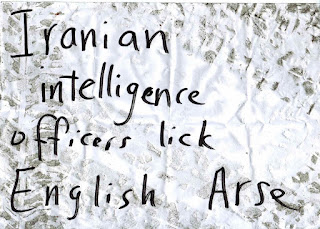 I find a note in the street on my way into work. It’s written in marker pen on a sheet of A4 paper. It’s the third I’ve found bearing this message in the last six months: ‘Iranian intelligence officers lick English Arse’.

Bob is back at work after a week off. I ask whether he’s had a good time and he tells me his dog ate his Yorkshire pudding in a café in Grassington.

Twice today, I’ve been asked for directions to the Spiritualist church.

At County Foods, I hand my paperwork to the receptionist and she fills in her signature while talking on the phone, “I’ve got this guy on hold, he’s ringing from a café in Batley. He’s on about black puddings...” Suddenly, a large dog jumps up from behind the desk
and starts barking at me, its front paws on the sill of the service hatch. The receptionist puts down the phone and drags the dog back down by its collar. A tall man in a suit leans in through an adjoining door and gives her a quizzical look. “Don’t ask”, she says. “Is it a guard dog?” says the tall man. “It’s guarding me from the likes of you, Alan” says the receptionist.

The chubby assistant with the heavy foundation and the glittery bits on her face at the newsagent’s tells her colleague about her unfaithful boyfriend. “He said she looked better
from a distance than close to but he still knobbed her, didn’t he? He’s got a picture of it on his phone!”
Posted by Kevin Boniface at 17:33